Chitika Insights has covered the heavily publicized launch of Google+ amidst a variety of reported statistics, some which stated that Google+ hosted a user base comprised of over 40 Million people, others which described the fledgling social network as nothing more than a ghost town. Initially, traffic on Google+ saw a rapid rate of growth, but was accompanied by a period of significant decline. Since then, Chitika Insights has been regularly keeping tabs on the condition of Google+, in order to determine the relative success of the social network. 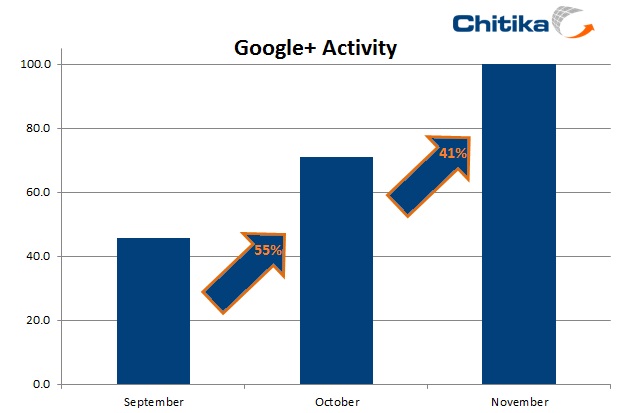 The graph above shows activity index for Google+ between September 2011 and November 2011. The highest level of activity observed receives a value of 100, and the other data points are simply a function thereof.The arrows represent the percentage increase in activity witnessed between month to month data sets, all of which were sampled in the second week of each respective month.We used a referrer distribution methodology to conduct this report. For more on the methodology see: https://insights.chitika.com/2011/our-referrer-distribution-methodology-a-chitika-special-report/

This level of growth may be supported by several key factors:

New reports suggest there are an estimated 62 million users on the social network, and our traffic index indicates a clear rise in activity as well. However, because Google holds raw data proprietary, they will be the only source to tell us if the activity is based on active users or new user sign ups.

Looking to test out some new ad headlines? Poll the People is here to help! We offer a free signup so you can test your headlines on real people and get feedback fast. So why wait? Sign up today and see how Poll the People can help you get the results you need!

Is Mac OS Lion the King of the OS Animal Kingdom?

LinkedIn Goes IPO, Why Aren’t You Marketing There?