IOS5 Breaks Into the Market with Record Numbers

On Monday, October 17th, Apple announced that over twenty five million customers have made the iOS 5 update. For reference, iOS 5 was released on October 12th, only five days prior to the announcement. The iOS5 update features all sorts of new additions like the Notification Center, iMessage, and Newsstand.

Chitika Insights data engineers observed iOS traffic from October 11th, one day prior to the release, until the 17th. The graph shows impressions from iOS5, as a share of total iOS traffic. Impressions from iOS 5 started to rise gradually from midnight on the 12th, and then jumped over 500% between noon on the 13th and the morning of the 14th 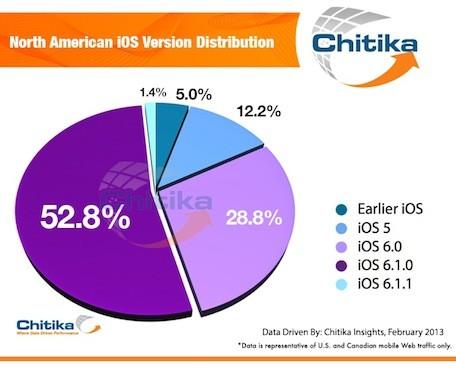 On October 14th, the iPhone 4S was released to the consumer market and Apple reported that over four million models of the new product were sold over the course of the weekend. There was certainly a correlation in our study, because iOS5 traffic continued to escalate during that time period.

By the final date in our study, iOS5 represented over 20% of total iOS traffic. In only five days, iOS 5 has already become the second most frequently used software on iPads and iPhones. iOS4 is still the predominant system in our data set, but this will likely change based on the rise in traffic from iOS5.

The sudden surge in iOS 5 adoption is likely due to the fact that that a large portion of Apple consumers fall under the category of “early adopter.” As with any product, it’s important to understand your user base. Understanding how a new product can impact your business on both the Macro and Micro level is essential to success. Keeping your finger on the pulse of the industry can help you adapt and react to different events in your area of business.

Insights will continue following iOS5 growth, to see if this incredible adoption rate keeps up, or slacks over the next few weeks. Stay tuned for future installments on this study.

Study: iOS Users Click on Ads 33% More than Android; CTR up 10% Since April