After a little less than a month on the market, The new iPad has made leaps and bounds into the hands of millions of consumers across the world. Despite critics and naysayers touting lackadaisical improvements and overheating issues, a market survey coming out of ChangeWave Research reports that 82% of the new iPad users said they were “very satisfied” compared to the 74% that felt similarly about the first and second generation iPads. Success for The new iPad has only been made further evident by official sales figures released by Apple, indicating that the tablet sold three million units across the first four days it was available both online and in stores.

Since then, the Chitika Insights iPad Tracker has emerged as one of the only available metrics to track the rate of adoption of the new iPad in real time. After surpassing a 5% adoption rate (relative to all iPads) after only four days on the market, The new iPad has been steadily gaining share on a daily basis. While this rapid increase can likely be attributed to early adopters of the product, a much more impressive feat lies in the tablets sustained growth in share since its release. 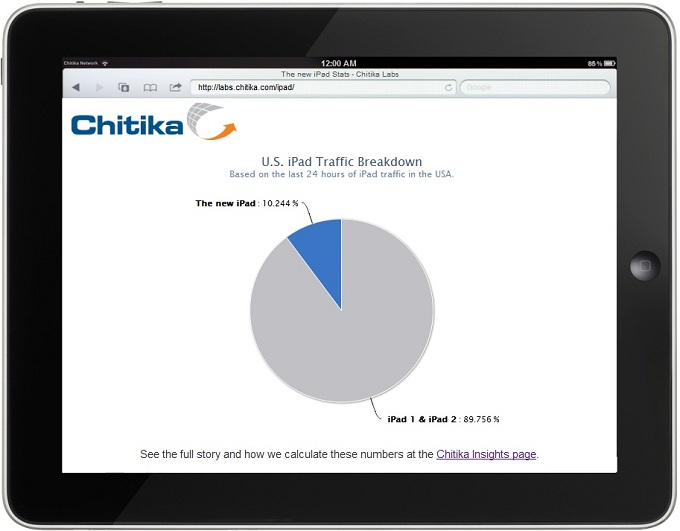 After less than one month, April 8th 2012 marks the first 24 hour period in which The new iPad garnered over a 10% share of the overall iPad market. This milestone was supported by heavy use over the weekend, including an all-time high in activity of over 16% on the morning of the 8th. California sits as the top state in the country for use of the product, where over 11% of all iPad users are on The new iPad.

The 10% threshold is much more than an indicator of adoption; symbolic meaning cannot be dismissed. Simply put, The new iPad stands as a prime example of what any company could hope for. IDC reports that Apple holds the place of the most dominant tablet manufacturer in the world, and with consumers on the verge of viewing the idea of a tablet as synonymous with an iPad, the odds are looking pretty good. This optimism is also mirrored in Apple’s stock price, which has risen over 100% in the last twelve months.

A great achievement notwithstanding, many questions lie ahead for the iOS suite. IDC has projected the growth in sales in the tablet market to exceed 100 million in 2012, and there are even rumors of a 7-inch iPad in the works. If current growth is any indicator of future success, The new iPad may begin to approach majority use in geo-specific regions across the United States.

Stay tuned to Chitika Insights for leading coverage on The new iPad, Apple, and the Tech Industry.

Samsung Galaxy Note Web Traffic on the Rise along with Sales

10 Weeks and Growing: iPhone 5 Constitutes Over 1/8 of all iPhone Web Traffic